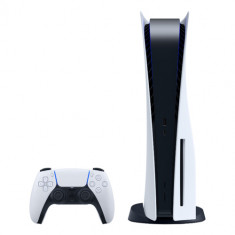 Available in other Styles, Configurations & Kits Available in other Styles, Configurations & Kits

Sony PS4 consoles are gaming platforms that are also great for streaming movies and music from your favorite apps. If you like jumping into multiplayer action in your favorite games, the PS4's online presence is sure to please. If you want to have friends over to play split-screen games, you'll be thrilled with the four controllers you can connect to the PlayStation 4 console. However, controllers aren't the only accessory you can connect. The PS4 includes integrated VR technology, which is compatible with a growing list of games.

The Sony PS4 is an entertainment hub that can keep you busy for hours. Several key features make the PS4 a multimedia center.

With 4K-ready video and surround capable audio, the PlayStation 4 console is a single-player gaming dream. If you enjoy the engagement of plot-driven gaming, the PS4 has hundreds of games with spectacular single-player missions.

After exhausting the single-player mode, the Sony PS4 console offers extensive online gaming opportunities in select games. If you want the challenge of multiplayer games with real people online, the PlayStation Plus network lets you connect to millions of other gamers.

The console boasts customizable controllers with features such as a touchpad and integrated light bar, and it can support accessories such as expanded hard drives, so you can store your saved games and movies. If you want to show off your gaming movies to your friends online, you'll find that pressing the share button on your PS4 controller is an easy way to instantly share. With a subscription to apps such as Twitch, you don't need external hardware to record and share your gaming. In addition, with PS4 Remote Play, you can even connect your PS4 controller to your Mac or PC. If you want to stream your PS4 action onto your laptop, or even onto a second screen, you can do it with the PS4's screen-sharing capabilities.

The console also doubles as a DVD and Blu-ray player, which means you can watch your favorite movies without investing in additional equipment.

Can I Watch Netflix on my PS4?

As a multimedia center, the PS4 lets you stream movies, TV shows, and even music, without the need for a separate device. From the PlayStation Store, you can download apps like Netflix, Hulu, YouTube, and Spotify. Some services require a paid subscription, but others—including YouTube and Vevo—have no-cost options that are subsidized through ads. If you're interested in cutting the cord on your current cable TV subscription, look into a service like Playstation Vue. This streaming TV app offers dozens of popular TV channels, typically at a much lower rate than standard cable.

Whether you want to record and stream your gaming exploits or you need the versatility to shift between gaming and music or movie streaming, the Sony PS4 console will have no trouble keeping up with you. Check out CameraLK's selection of PlayStation 4 consoles to find everything you need to start gaming.